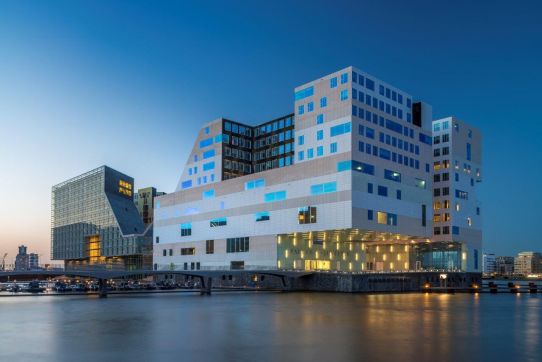 WesterIJdock in Amsterdam is a newly built complex of five buildings on a common parking garage, built in the water next to Amsterdam central station. Two of these buildings contain the Amsterdam court house, the “Paleis van Justitie”.
Peutz was consultant for acoustics, building physics, sustainable building and designed the audio visual installations of meeting rooms, restaurant, 15 court rooms and 4 digital court rooms.

Based on specific requirements for the several rooms such as courtrooms, cells and offices walls, floors and ceilings were dimensioned, for example floating screeds, special walls and sound-absorbing ceilings or sound-insulating ceilings.

With CFD calculations the indoor climate of standard offices was tested and reviewed.
Using a scale model that was placed in the wind tunnel of Peutz, the wind climate on walking level was evaluated and facilities for improvement were dimensioned.
In the wind tunnel also "short circuit effects" between the outlet of the parking and the inlet grilles for building ventilation were tested.

Daylight in the office spaces of the court house

The Dutch building contains requirements for daylight inside buildings. The critical factor was that a number of offices were located at the facades on either side of the narrow street between the two buildings.
During the design process the size of the windows, the thickness of the facades and the outside color of the facades were optimized using ray tracing simulations (Radiance), taking into account other influences like solar heating.

Daylight in the courtrooms

Most of the courtrooms were located inside the building, at some distance from the facades. These rooms were given indirect daylight. The perception of this daylight was visualized with a ray tracing program.
There are also court rooms that receive daylight via the overlying meeting rooms. A chimney is created with openings in the roof and the ceiling.

The digital courtrooms use specific videoscreens, integrated into the furniture. These screens deliver the digital evidence to judges, lawyers, suspects, as well as audience.
Intensive studies were performed in order to minimise glare on the hardened glass covering the videoscreens (type+colouring antiglare coating). For a room with a limited ceiling height, the location and type of artificial lighting was chosen to realise evenly distributed horizontal and vertical illuminance of objects for camera use, while minimising the glare on the videoscreens. As for the criteria of free sightlines from participants and camera's towards hands and posture of suspects, the maximum videoscreen-angle within the table is taking into account.

The building is well insulated, has a very good airtightness and is equipped with HR ++ glazing with low solar factors. So the energy consumption for heating and cooling is restricted. Heating and cooling are generated by an electric heat pump in combination with heat and cold storage in the soil. Also is provided in heat recovery on the ventilation air. Further, assumed is an optimized power for lighting.