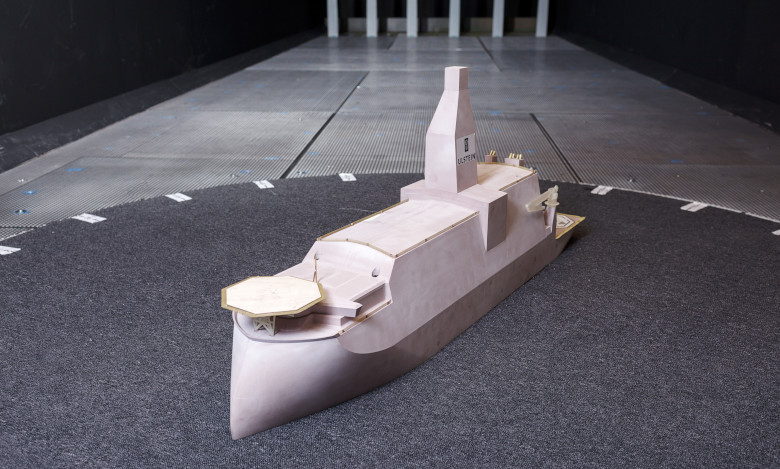 Ships designed for extreme conditions such as the arctic can show aerodynamic properties which are significantly different from conventional ship shapes.

For the Ulstein designed arctic drillship therefore measurements of the wind loads have been conducted on a scale model of the vessel in the Atmospheric Boundary Layer Wind Tunnel Facility of Peutz. The wind loads are measured with a high frequency 6-component balance system, while the model is exposed to an approach flow according to the actual maritime wind velocity and turbulence boundary layer profile. Through wind tunnel measurements of the wind load coefficients the highest accuracy is achieved in calculation of required thrust capacities, DP capability and DP definition and optimisation. In addition to DP calculations the wind load coefficients are used for stability calculations as an alternative to handbook methods like MODU code.

A similar test approach with a uniform flow is followed with below waterline models to determine current load coefficients.

Wind tunnel measurements for turbulence and hot gas plume properties have been performed to assure safe operational conditions and to provide the required data for certification of both helicopter decks according to CAP 437.