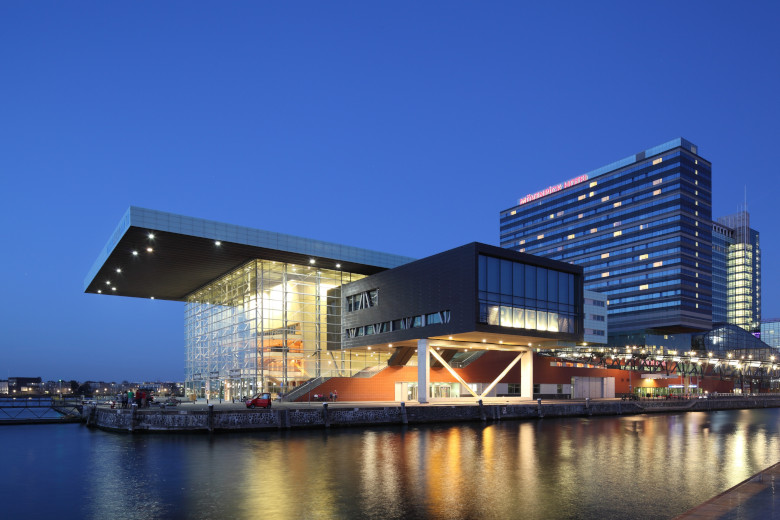 Muziekgebouw aan 't IJ (the successor of Muziekcentrum de IJsbreker) has two halls as music complex for contemporary music (including ensembles, orchestra, choirs, dance, musical theater): a concert hall with about 750 seats and a small foyer hall (about 250 seats). The BIMHUIS is a part of the Muziekgebouw aan 't IJ and has a hall with 200 seats and 200 standing places as center for jazz and improvised music. The glass back wall of the stage with a view over the city forms the backdrop of multiple television shows. Furthermore, the building contains a cafe restaurant, rehearsal spaces and offices of various cultural institutions.

Acoustic quality that can measure at the highest level internationally

Partly based on scale model research, a concert hall is realized that can measure at the highest level internationally. Reviews are full of praise ("phenomenal acoustics", "an acoustic miracle" and "astonishing quality"), also from other countries ("exzellenter Akustik") and ensembles and orchestras from abroad come here.

The concert hall has a great flexibility with a movable floor, ceiling and stage walls. This achieves unique variable acoustics, from chamber music ensembles and medium-sized symphony orchestras to pop music and various meetings with highly flexible auditorium arrangements. The concert hall is equipped with unique computer controllable wall lighting all around, with which separate lighting effects can be obtained per performance.

Adjustment of acoustics by changing the space volume is unusual. By combining a technical ceiling (unusual in a concert hall) and movable ceilings, an invisible adaptation of the acoustics has been realized.  The innovative walls combine acoustical diffusion behind an open construction of wooden laths with LED lighting.

Based on CFD calculations both the climate in the lobby and in the concert hall was optimized. There was an extremely low acoustical requirement for the air inlets. Supported by cfd studies and laboratory research, a specific air inlet system was developed with which a sound level of 12 dB(A) was achieved. Another important theme was the limitation of energy use in combination with good comfort. Furthermore, the climate around the building and at the entrances was investigated by means of a wind tunnel study. In the context of fire safety, consultancy focused on fire compartmentation and evacuation routes.